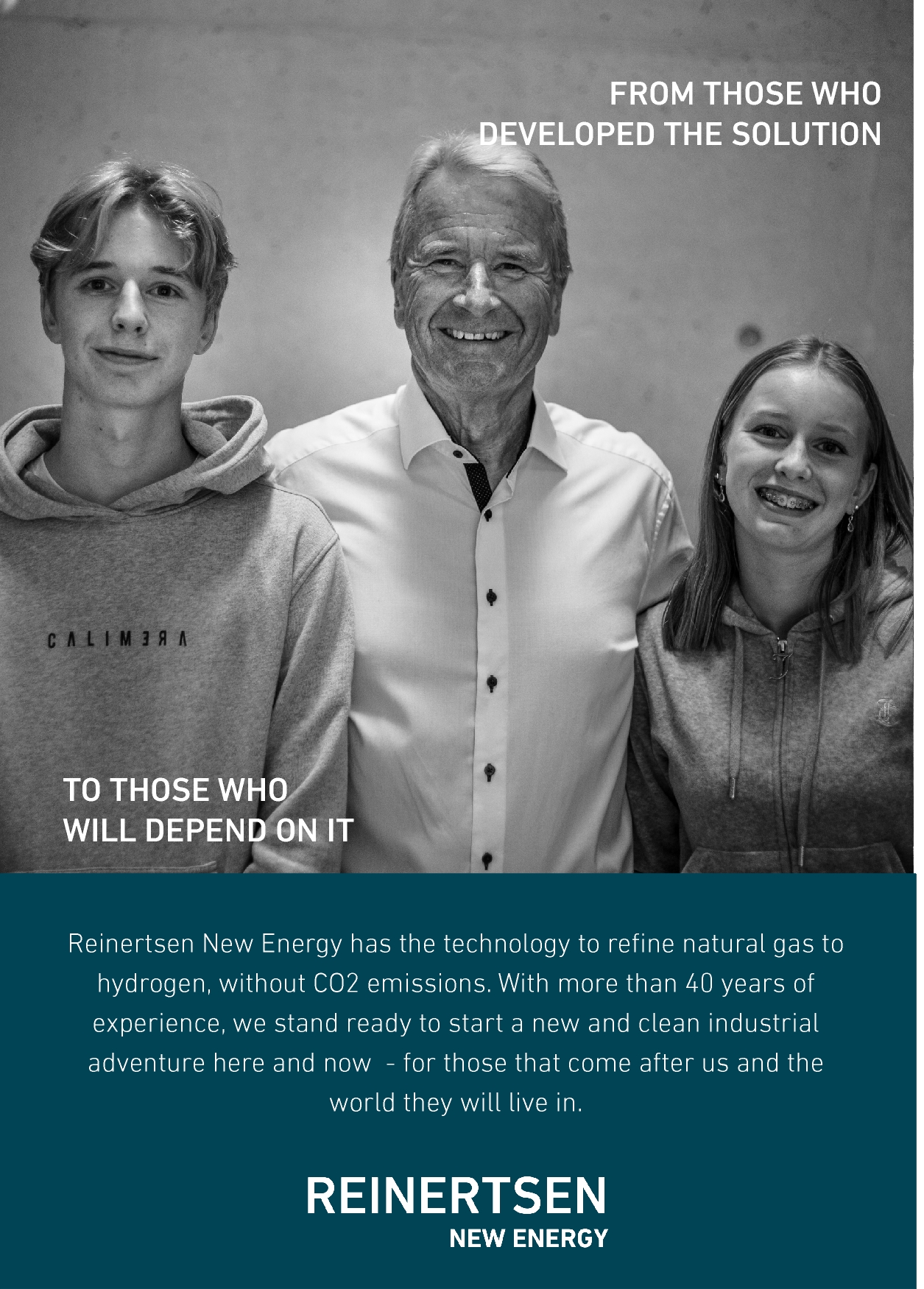 In 2011, Reinertsen acquired the rights to Sintef's Palladium membrane technology and started a comprehensive program to further develop and commercialize the technology. The goal was to participate in Prime Minister Jens Stoltenberg's "moon landing project" at Mongstad where pioneering CO2 capture technology was to be developed and tested.

Our technology splits natural gas into two parts, namely CO2 and hydrogen. We eventually became very interested in the "by-product" hydrogen. We had already captured the CO2!

The emergence of a global hydrogen society has been talked about for several decades, where the new energy carrier hydrogen would give zero emissions from use and combustion. But, so far, hydrogen has not had a breakthrough. The main reason is that hydrogen is so far produced in small quantities, with low efficiency, at high cost and with large emissions.

For the past 10 years, the world has seen that renewable energy production has had a significant breakthrough and has led to major emission cuts, internationally. This development will continue and can significantly contribute to the objectives of the Paris Agreement. However, in recent years it has become clear that renewable energy alone will not be enough. Carbon capture and storage (CCS) and large-scale hydrogen production will be necessary.

The world will demand large amounts of hydrogen. Hydrogen can be produced in several ways, however, hydrogen produced from natural gas is the only method that will satisfy the need both in terms of quantity and cost.

We therefore started the development of emission-free process plants that could produce large volumes of competitive hydrogen. The markets for clean hydrogen are emissions-free power plants, city gas networks, refineries, fertilizer production, chemical plants, transportation and maritime operations. Hydrogen cars in Norway is currently the least interesting market. A large hydrogen production plant with CCS will cost approx. 15 billion NOK to design and build. In addition, several markets will have additional cost for transportation, distribution and use of hydrogen. Transportation and storage of CO2 is also a required part of the solution.

The main objective of emissions-free production of pure hydrogen is a significant reduction of emissions in all sectors where hydrogen is used. The alternative use of emission-free hydrogen from a large plant will typically result in a reduction of 3 million tons of CO2 per year, or the equivalent of 1.5 million gasoline / diesel cars. If we succeed in converting natural gas to hydrogen and sending it in the pipelines to Europe, the potential reduction could be a few hundred million tons of CO2 per year. Corresponding to the emissions from more than one hundred million petrol / diesel cars or a few thousand industrial plants. This will make a significant contribution to achieving the climate goals!

Over the past few years we have built up an organization with extensive expertise in hydrogen technology and we have developed completely new total solutions for emission-free hydrogen production. This is based on known technology elements put together with the focus on capturing as much CO2 as possible. The Palladium membrane technology, which we have been developing for almost 10 years, is an important technology element and plays a key role in the design of large, emission-free hydrogen plants.

We have marketed our technology and solutions internationally to energy companies, refineries and the petrochemical industry, and we have caught the attention of several of the major players and in the political environment.